Why You Should Get Fitted for Golf Clubs

I am the complete opposite of an equipment junkie, and have engaged in debates with many people about how I think golf technology is overrated. I’ve written before about how I think the golf industry has brainwashed a lot of golfers into believing that equipment changes can miraculously alter your performance on the course.

I’m not completely unreasonable though! While I believe that the golfer is the one ultimately responsible for making a good swing, I have always thought golfers could benefit from using the right kind of equipment for their specific game. Golf is hard enough, and there’s no sense in making things more difficult by playing clubs that are not right for you.

I was fitted for my Ping i-series irons about 9 years ago at Pete’s Golf Shop. I love my irons, and have supreme confidence in them on the golf course. I couldn’t help but wonder if I had been missing out on something with newer technology, or maybe at this point I should be playing a different kind of iron because my swing has changed since then, and I have become a better ball striker.

I am looking for any advantage I can get these days in my game, and having the right equipment is part of the equation. With the advancements in technology, club fitters can dive deeper than ever into the data of what’s going on with your club face, and the ball at impact.

So I made an appointment with Kirk Oguri at Pete’s Golf Shop to get an equipment checkup. Kirk, and the rest of the staff at Pete’s, are experts. They have been recognized nationally as the top 100 fitters in the country. Serious golfers in the New York Metro region have been going there for over 30 years because they truly care about getting the right equipment to help golfers. These guys know everything there is to know about clubs, and how to fit golfers properly because they were one of the first ones to do it.

Before our session, I briefly spoke with Kirk about my goals as a golfer, and what I was looking to get out of the fitting.

I was pretty surprised at what we found out, and it reinforced my belief of why golfers should see an experienced club fitter.

Kirk took one look at my clubs to see where I had worn out the club face, and then five swings later it became quite obvious what was happening. My clubs were way too upright. If you take a look at the picture below you can see where I make contact on the face of the club, and how the toe of the club is way above the ground. 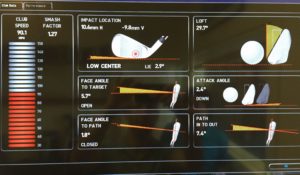 While my numbers are pretty good and I produce a consistently efficient swing, Kirk said that if I want to get to the next level as a player, I can’t continue making contact with that part of the club face, and a simple lie adjustment might help me achieve that.

When I was first fitted for my irons I had a very vertical golf swing that produced a left to right ball flight. About four years ago I made a major change to my swing plane, and I now come from the inside. While I figured out a way to make my irons work for me on the course, I am not putting myself in the best position to be successful.

Kirk didn’t think I needed to change irons. He believed the fix was by adjusting the lie with my current set, and making them a bit flatter so that the toe of the club would be touching the ground. He said it would take some time to get used to, but it would probably allow me to flight the ball more efficiently, and not put so much spin on the ball (I produce a little too much).

Wedges and my driver

We also took a look at my driver, because I am looking for any way to get more consistent on my tee shots. I can make some nice swings in the controlled environment of the test facility, and everything looked great in terms of my impact, spin, and distance. However, I told Kirk that when I’m on the course that is not the case. I am still struggling to find fairways with the driver.

The shaft on my Callaway driver is a bit long at almost 46”, so we are going to try and find a similar one that is shorter, and make sure we get it weighted correct. I probably won’t lose any distance, but it should help me keep the ball in play a little more. That is an experiment I am definitely willing to try! MyGolfSpy has done some testing between drivers that had 43.75″ vs 45.75″ shafts, and the data proved that the shorter shaft was more accurate, and players barely lost any distance.

Additionally, the grooves on all of my wedges are completely shot after so many years of practice! After taking a look at my impact pattern Kirk is going to fit me for Ping Glide wedges, and make sure the lie and bounce match my swing and the kinds of wedge shots I like to play on the course.

Overall I’m excited to make the changes. Even if this helps me gain 1/2 – 1 stroke a round at most I think it’s worth it. It’s obvious that I had found a way to make my irons work for me in their current state, but if someone who is an expert is telling me there is a glaring problem, I will listen.

Why should you get fitted?

I play to about a .5 to a 2 handicap lately, and making a change to my equipment is not going to monumentally change my scores. Like I said, if it can even give me the slightest edge of shooting a 74 instead of a 75 that is worth it. Shaving strokes is very hard to come by when you get down to that level.

I asked Kirk a bit about his work with other players. His main point was that golfers who have higher handicaps stand to gain the most from playing the right equipment. At that level you can eliminate a decent amount of strokes by getting fitted properly. Making sure your lie angles and shafts are right for your swing can potentially avoid serious mishits, and even boost your distances a significant amount.

If you watch commercials on the weekend during golf tournaments, and make your purchase decisions based on what driver or iron set sounds the best for you, then you are likely making a mistake.

Just because you think the newest set of Taylor Made irons look cool doesn’t mean they are the best for your swing.

I didn’t name my site Practical Golf so I could blow a bunch of smoke up your butts about what it takes to shoot lower scores. If you go and get fitted for clubs tomorrow, you won’t magically drop from a 95 to an 85. However, it might help you start hitting some shots a little more solidly, and all of a sudden you’ve got a little pep in your step and you feel confident knowing your clubs are custom made for your game.

Playing better golf is a complete package. It’s about practicing smarter, sharpening your mind, making adjustments to your swing, and yes your equipment is a part of it. If you’re going to open up your wallets, make sure it’s the right stuff. Find yourself a local club fitter like Kirk, and figure out what is going on with your current equipment, and if it’s a good idea to make a change.

I believe it is completely worth it.

Why is Smash Factor so Important?

Avoidance Is Not a Good Strategy