The term “Quiet Eye” was coined by Professor Joan Vickers, a Professor in Kinesiology (the study of body movement) at the University of Calgary. In a study, she wanted to find out how elite golfers use their eyes to find out if there was a difference among different levels of golfer. She used headgear which allowed her to see exactly where the elite golfers were focusing their eyes, before, during and after a shot. 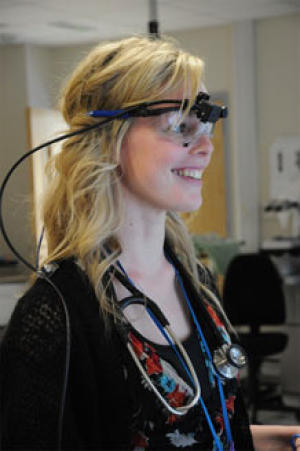 What she discovered, was that elite golfers have a common pattern of fixation of their eyes during a shot which is different to an average player (16 handicap).

She found that the average player is more erratic with the gaze and they don’t hold their gaze on the ball for as long, before taking the club back. They also tend to follow the ball with their eyes. The result of both is a more inconsistent strike on the ball, leading to several lost shots per round.

Fixation on the ball

Breaking it down further, she found that the most important factor in the difference in ball striking, was the length of the fixation on the ball right before the shot. Elite players fixed their eyes on the ball for an average of 2 seconds, while the average player fixed their eyes for an average of 1.5 seconds. And this 0.5 seconds makes a difference!

Golf is a hand-eye coordination sport. The eyes tell the body what it needs to do. The ball is essentially an intermediary target in the process of hitting a good golf shot.

How quiet eye can help your putting

Another study was performed by Dr. Mark Wilson a lecturer in human movement science, which involved reminding players to briefly focus on the EXACT spot where they wish to send the ball, and then settle their eyes back on the ball and hold them there.

Dr. Wilson conducted the study with 2 groups of golfers. One practiced on different aspects of their putting stroke and the other group focused on the a visualization technique of fixating the eyes between the ball and the target and holding their gaze on an exact spot on the ball for 2-3 seconds before taking the putting back.

The results were convincing. Those who worked on the quiet eye technique were far more accurate than those who focused on their stroke. Interestingly still, the group who were “visualizing” had lower heart rates and less muscle twitching, showing less “performance anxiety”.

In putting, the quality (and consistency) of the ball strike is something that gets better with better players. They simply keep their eyes focused longer on the back of the ball.

Dr. Wilson says he encourages his students to “keep their gaze on the back of the ball, which is the contact point for the putter, for a brief period before starting the putting action” long enough to say “back of the cup” to themselves.

Wilson says, “Such intense focus on the ball blocks out negative interference from mental chatter and allows the brain to process the aiming information and direct the body in the proper motions to get the ball where you wish to go.”

Immediately after each putt (before they saw where the ball went), the students had to grade themselves out of 10 on the quality of the strike, so this starts to become the goal. If you can consistently hit the ball out the center of the putter, you will putt more consistently.

Watch the world’s best players and you’ll notice them switching their gaze between the ball and the target (“scan path”), then fixating on the ball for 2-3 seconds, then remaining in the same position for 1-2 seconds after it. So many weekend golfers follow the ball and come out of their posture too early, leading to inconsistent contact with the putter-face and variable distance and direction.

With putting accounting for around 45% of the average golfers shots, this can be an easy way to shave strokes off your handicap and putt better under pressure. Testament to this – the same 2 groups of golfers were then put in a high pressure environment, competing for a prize. Those who had been learning the visualization techniques sunk 16% more putts than the group that had not. They had a lower heart rate and struck the ball more purely to their target. Proof that simple techniques can help you perform better under pressure!

“I often get asked what I look at when I’m hitting the ball. I narrow my focus to one dimple at the back-center of the ball. That’s where I want to hit it. Try this. It gives you a better chance of staying down through the shot and making solid contact.” – Tom Watson

When you’re focusing on the ball before taking the club back, pick out a single dimple to look at. So it would go like this:

The Warrior Canine Connection: How Golfers Can Help Veterans With PTSD