SeeMore Putter has become one of the most popular independent putter manufacturers in the industry. Their unique design and putting system have grown a substantial base of loyal golfers who swear by their products. I had been hearing about them for quite some time and wanted to learn more about what makes them different.

Despite plenty of advances in design, technology, and manufacturing processes – most golfers are still purchasing putters that are based on the original Ping Anser design from more than 50 years ago. I am always on the lookout for unique products in the golf world, and SeeMore Putter certainly fits that mold.

In this review, I’ll give you a brief understanding of who the company is, what makes their RifleScope Technology different, and my impressions of their putters.

SeeMore Putters was launched in 1998 by golfing professionals in California. Their goal was to make a unique design, which would help a golfer feel confident that they were aligned properly before every putt. It centered around a concept that helps a golfer align the putter using a method similar to aiming a rifle. After several years of research and development, they were able to show their RifleScope technology to the world.

Like most new businesses in the golf industry, the first year was spent trying to spread awareness amongst recreational golfers and on the PGA Tour. That same year Payne Stewart had decided that he would go into the 1999 season without an equipment contract after not winning an event in four years. His goal was to fill his bag with 14 clubs that he trusted regardless of the manufacturer’s name.

He had heard about SeeMore Putter through several acquaintances and decided to give their putter a shot the week of the AT&T Pebble Beach. Payne was struggling with his putting and believed that an inconsistent forward press was changing his loft and face angle at impact. After getting a brief session on how the SeeMore technology worked, he had only one day to practice before the tournament began.

He would go on to win the rain-shortened event with a stellar putting performance. Payne would also lead the PGA Tour that year in several key putting stats, culminating in his U.S. Open victory (we all remember his clutch putt on the 72nd hole). 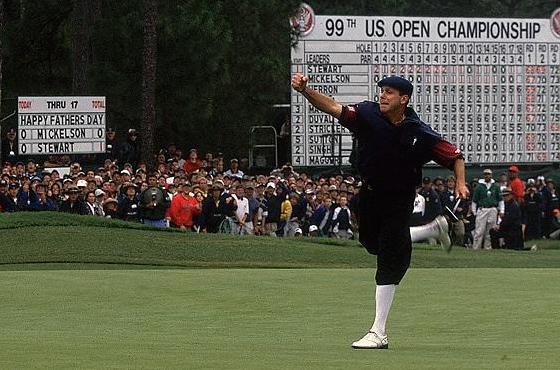 As you would expect, the company started to see orders from around the world when the story got out about Payne’s new putter. The ownership planned a big marketing campaign around him and then disaster struck when Stewart tragically died in October of 1999. The company could no longer revolve their brand around Payne’s image, and eventually sold to another firm.

In the early 2000’s SeeMore essentially sat in a pile of mothballs before it was sold to its current owners, who formerly designed putters for Odyssey. As fate would have it, another major victory thrust their brand back into the spotlight. Zach Johnson won the 2007 Masters using a SeeMore Putter, and it once again ignited fascination with the brand. People wondered who was making the design, and it helped launch their business to where it is today.

The concept behind their putters is different than any other out there. Their alignment system helps golfers have a consistent setup before every putt. All of their putters are designed to be neutral at address (no forward press) and they are weighted to promote a natural arc with a golfer’s stroke. The goal is to get golfers to return the putter back to a square position at impact. This is something that players at every level struggle with.

When you purchase a SeeMore Putter, you are essentially buying into a system. This is exactly why you won’t find their putters on the shelves of your local sporting goods store. They have built up a network of instructors and custom fitters around the world who are trained to teach golfers how to use their putters properly and to ensure that golfers are getting a putter that is built to their exact specifications.

This is also how they have built up their network of rabid supporters. Generally speaking, internet golf forums are a place for golfers to show off their new Scotty Cameron purchase. However, if you do a little digging around you’ll see countless posts from golfers who praise SeeMore Putter and credit them for helping improve their putting on the course. Personally, that’s how I found out about them.

Bonus Content: Be sure to check out my complete guide to putting.

How Does a SeeMore Putter Work?

In theory, the concept is quite simple. Watch this video because it will do a much better job of explaining it than I ever could…

Essentially what they are trying to do is remove all of the variables that could lead to inconsistent putting. By setting up the ball the same way every time, and getting golfers to make the same stroke path, their goal is to help reduce aiming errors and pushing or pulling putts.

As many of you know that’s easier said than done. Putting is extremely difficult, but any incremental improvements golfers make can result in lower scores over time. As with most things in golf, it is all about managing your expectations.

I am looking for a reboot with my putting this year. Despite being a pretty good ball striker, my performance on the green is certainly the area of my game where I am “lagging behind” a bit.

Recently I decided to switch to a claw grip to help reduce the amount of influence my right hand has on my stroke. As such, my setup and stroke have changed a bit and I wanted to make sure I was properly fit for a new putter.

So I scheduled a fitting with SeeMore Putters at the PGA Show in Orlando. I spent some time with Richard Jacobs, who is one of their certified putting coaches. The session was similar to fittings that I have taken part of in the past. Richard watched me putt for a while and noticed a few things in my setup and posture that needed to be adjusted with my new grip style. Then we started to experiment with a few different models to see which one best fit my eye and putting stroke.

It took about 15 minutes for me to understand how their putter was intended to be used. I had to alter my ball position, hand setup, and understand how the Riflescope Technology fit in with my putting stroke. Richard kept stressing that he was trying to remove variables in my setup and putting stroke that would lead to mistakes on the greens.

Going through this process made me realize that if you are going to purchase a SeeMore Putter, it is probably best if you work with someone who understands their system.

We settled on a particular model and size, and I started to make some adjustments that Richard was able to diagnose. After rolling a bunch of 10 footers in the cup, I went to the larger green and drained a 40 footer on my first attempt – obviously, we had dialed it in! Just kidding, but things did feel good and I really like the putter and how my stroke felt with everything trying to be neutral.

After deciding on specs such as length, lie angle, loft, and grip style I placed the order for my putter and it arrived the next week.

As a side note, SeeMore has a partnership with Rosemark grips. I absolutely love them and went with one of their options.

My Impressions of SeeMore Putters

I generally don’t do equipment reviews on this site because one person’s opinion of a product is not the end all be all – especially for golf clubs. However, the reason I was so interested in SeeMore is that they have something that is genuinely different than other putter brands out there.

After putting with my Pure Center Blade for a couple of months I do believe there are merits to their design and system. The weighting of the putter does help promote a slightly arced stroke, and going through the process of aligning yourself before each putt is beneficial in my opinion. On top of that, the putter feels great at impact, which is what you would expect from a company using premium materials. I will say there is a certain amount of confidence you get knowing that you are set up for success if you buy into their system. Overall, I think it’s a great product.

Speaking truthfully though, I can’t tell you with certainty if that is going to necessarily translate to lower scores for everyone who purchases one of their putters. Putting is part art form and science. Any of the top instructors who have done the research will tell you that. Some of the greatest putters of all times have had idiosyncratic alignment and general methods. However, what I can tell you is that many golfers (including myself) struggle with going through a consistent routine before making a putt. I’ve watched plenty of players adjust their hand position and alignment multiple times during a round. Most successful putters aren’t doing that. They are going through almost the same exact process each time. This is exactly where their design can help.

If you go through the same process and have visual confirmation that you are set up properly before each putt, then you are removing a variable that can harm your putting performance.

Almost all of the SeeMore Putters range between $200 – $400. Their putters are assembled in Tennessee and built to the specs designed, so you can feel confident that you will get exactly what you order. This a premium product and as such it’s going to be a little bit more of an investment.

The difference between their Original Series and Studio Series is essentially the quality of materials. If it’s important to you to get the absolute best craftsmanship, you can pay the extra money ($395), but anyone from SeeMore will tell you that the performance will not be altered.

I would highly recommend going through one of their certified instructors or fitters. You want to make sure you are properly trained on how to use the putter, and more importantly, you should get custom specs. They have a complete listing of stores and instructors you can work with on their website.

Simply put, I can see why SeeMore Putter has become one of the most successful independent putting manufacturers out there. They have something unique that can help golfers, and their loyal fan base has given their concept validation.

PGA Show Recap: The Good, the Bad and the CBD

The Best Dallas Golf Courses You Should Be Playing