For as long as golf has been a sport, the grip has always been considered a fundamental of the swing. Whether it’s an instructional video on Youtube or an article written in a magazine on how to grip a golf club, instructors continue to talk about what they believe is the proper golf grip. All of them revolve around the idea that a neutral grip is correct.

What do I mean by this? Every single golf swing has an ideal grip matchup. This allows the mechanics of that specific movement to work successfully (in unison) and give that golfer the best results possible.

In some cases, that might be a neutral grip. However, there are many others out there who would benefit from something weaker or stronger than what’s been taught as the “ideal.”

Why There is No Such Thing as a Proper Golf Grip

Golfer A has a neutral grip and always misses his/her target to the right.

Golfer B has a weak grip and lands right on target each time.

If you strengthen the grip of Golfer A and change their neutral position into something stronger, they will hit the target more often and have a higher chance to succeed.

If you strengthen the grip of Golfer B and change their weak position into something neutral, they will start missing the target and subsequently play worse.

Results from the scenario:

Golfer A’s swing was most functional with a strong grip.

Golfer B’s swing was most functional with a weak grip.

In both cases, neutral was NOT the ideal grip matchup for their specific golf swing.

If two golfers can have entirely opposing grips and hit the ball equally well, how can we sit here and say that all golfers “need” to grip the club a certain way? It simply wouldn’t be logical.

Keep in mind that this was simply one possible scenario (out of many) where a golfer struck the ball better without the “neutral” grip that everyone speaks about or suggests. For that reason alone, I do not believe that there is only one proper golf grip.

How to Grip a Golf Club Differently

In this section, we’re going to examine the 3 most common grip types (strong, neutral, weak) and discuss the following:

SIDE NOTE: Keep in mind that there are many other grip combinations that exist, but I chose to only focus on these 3 due to their popularity and percentage of use. Any other grip not mentioned can be just as functional given the right matchups/circumstance.

I created a video to explain some of the terms that I use. I strongly recommend watching it so you can understand how each grip matches up with your wrist angles: A strong grip (seen in the photo above) is a position on the club where both hands are rotated towards the trail side of the golfer.

Generally speaking, it’s when the “line” or “V” created between the thumb and index fingers point toward the trail shoulder (right shoulder for right-handers) or beyond. This will indicate a strong position. It means that the clubface will be more closed with this grip compared to a weak or neutral position (assuming all other factors are equal).

Here are just a few examples of professional golfers who play with a strong grip:

As you can see, it is possible to play golf at an elite level using a strong grip. The important part is knowing what you can or can’t do if you want to play golf this way.

The biggest and most obvious benefit to having a strong grip is helping you close the clubface. If you struggle with an open face at impact, the reality is that strengthening your grip will help. In many cases (certainly not all), there are better options out there. They can help you maintain face control that will come with added benefits.

Strengthening your grip doesn’t always solve the root cause of your swing issues. Improving other factors, such as wrist angles, will often lead to more long-term improvement.

Regarding matchups, I would suggest having a slightly extended or neutral (flat) lead wrist at the top of your backswing if you have a strong grip. The more you flex the lead wrist, the more you close the clubface. So playing with a flexed lead wrist and a strong grip could lead to big trouble (a case of the hooks). If you do plan on swinging that way, be aware that there are many other things you would need to do well in order to balance out how closed that clubface will get.

Simply put, you’re better off with an extended or flat lead wrist when using a strong grip. This could make it the proper golf grip for you. A grip is considered weak when both hands are rotated towards the lead side of the body. Notice above how the “V” created between my thumb and index fingers are pointing much more towards my lead shoulder. This will indicate a weak position. All else being equal, the clubface will be more open with this grip type compared to the neutral or strong position.

Ben Hogan was famous for using a weak grip, as illustrated below:

The best matchup you can have for a weak grip is a flat or flexed lead wrist. As I mentioned above, flattening the wrist will help close the clubface, which is exactly what a weak grip needs to help neutralize the open position that the grip is giving you.

If you have a weak grip with an extended lead wrist, be aware that your clubface is virtually guaranteed to be open throughout the swing, so you’ll likely need a lot of body rotation to help orient the face back to the target. If you have that matchup but without the rotation, you’ll need to compensate in some other way or I guarantee you’ll struggle with a slice.

Just as you saw with the strong grip, weakening the position of your hands could theoretically help your ball flight (ex: cure a case of the hooks), but that won’t necessarily solve the root cause of your swing issues. It might, but often times it’s only a temporary fix. You can be covering up the real problem with a band-aid. A neutral position is the most balanced of the three due to the added freedom that comes with it. The hands/wrists are in a “square” position relative to the clubface. As such, there are fewer constraints being placed on your golf swing. All else being equal, the clubface will neither be closed nor open with this type of grip.

You can see in the photo above how the “lines” travel right up the center of the grip. This can be affected by how much/little shaft lean you have in your setup. Those lines will either point towards your sternum or slightly towards your trail ear (right ear for right-handers).

Here are a few examples of professional golfers who play with a neutral grip (Adam Scott and Tiger Woods): The biggest advantage of a neutral grip is the fact that it doesn’t require any added compensation to help control the clubface. Due to its neutral nature, your wrist angles are a direct representation of what the clubface is doing.

Neutral grips don’t have many disadvantages. However, they aren’t the proper golf grip for every golfer. It is because the hands are not the only body part that directly influences the delivery of clubface and club path at impact.

Personally, I would much rather see a new golfer hold the club in a position that they chose themselves, instead of forcing them into something that might feel weird and/or restricting. This is barring any extreme circumstances.

It’s important to note that limitations can come in many forms. While a neutral grip may allow for more freedom of movements and positions (less disadvantages), a new/different grip can feel very restricting and actually reduce your ability to swing the club effectively. Not to mention the fact that it might discourage a beginner from wanting to keep learning if people keep telling him/her that they “have” to hold the club a certain way.

Wrapping It Up – How to Grip a Golf Club

People often say that the golf swing is like a puzzle. It needs to have all the correct pieces in order to function properly. Well, the grip is one of those pieces and the wrong fit can lead to a poor result (or in this case, an unfinished puzzle). There’s no way to accurately tell someone the proper golf grip they should be using before seeing them make a swing. 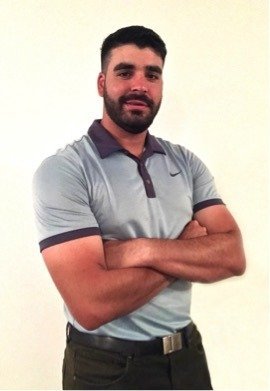 Shauheen Nakhjavani is the head golf professional at Mystic Pines Golf & Country Club. He is based in Montreal, Quebec and currently coaches players on the PGA Tour Canada, Asian Tour, and Web.com Tour. He offers online, or in-person coaching and is hosting 3-day golf schools in Canada & USA.

You can find him on the following social networks:

Which Is Better, a Fade or a Draw?

The Mental Benefits of a Great Short Game