Hit Down on the Ball, and Take Huge Divots: It’s Not Entirely True

‘Hit down on the ball’ is a phrase that has been told to golfers struggling to improve their ball striking for decades. The conventional wisdom has always been that better golfers will take a huge divot with their iron shots, and the key to “compressing” the golf ball is to produce an extremely steep club path towards impact.

We see pros on TV taking a big divot all of the time, and to be honest I have always assumed this was the secret to becoming a better ball striker myself. I’ve often told golfers who are struggling to hit their irons well, that the key to getting the ball up in the air, is hitting down on it. While it sounds counterintuitive, that’s just what I had been taught.

The problem is that most golfers fail to translate such terms as ‘hitting down on the ball’ into an actual swing move. It might be explained to them by their local teaching pro; they will nod their head in approval, and then when they go to swing the club they end up hitting these terribly fat shots that go nowhere.

They end up striking the turf before the golf ball, which is the exact opposite of what you want.

What I’d like to suggest is that you don’t need to hit down on the ball as steeply as you think in order to hit great iron shots.

I’ll warn you that there is some technical information ahead, but I will try to make it as simple as possible for you to digest. The main reason I agree with the three teachers below is because I have been able to play effective golf, and be a relatively solid ball striker without having a steep swing that produces an enormous divot.

This is one myth about the golf swing that I would like you to understand is not necessarily true, and it actually can be harmful to your game.

Update: There’s an exciting new product that we reviewed that can help with your ground interaction. Check out the Divot Board review here.

For most of my golfing life, I have been a picker of the golf ball. I never took a huge divot, and I always believed this was some kind of deficiency in my game. I chalked it up to the fact that I had done most of my practice on range mats when I was younger, so I didn’t get the real feedback of practicing on grass, and learning how to take those perfect divots in front of the golf ball.

The strange thing is that when I have gotten a chance to practice on grass ranges, and focused on taking bigger divots that were considered the right kind, I really didn’t notice any change in my ball flight or distance.

Additionally, when I was consciously trying to hit down on the ball on the golf course to take these bigger divots, I would just hit a ton of heavy shots. We’ll get into why that was happening later in the article.

So while I felt I might have been missing something, I was never really able to prove to myself that taking a bigger divot actually improved my shots. In fact, it made a lot of them worse.

If Steve Stricker can be one of the best golfers in the world without taking a huge divot, then it was good enough for me.

Hitting down can be harmful

Joe Mayo is the director of instruction at TPC Summerlin in Las Vegas. I see him on Twitter quite a bit (you can find him @TrackmanMaestro). I came across his article entitled The Truth About Ball Flight Laws. It’s very interesting, and I encourage you to read the whole thing.

What struck me was his explanation about why better iron play does not require a divot.

He doesn’t suggest that amateurs shouldn’t try to hit down on the ball. His argument is that recreational golfers will do more harm than good to their game by trying to strike the ball more steeply with the intent of making a large divot because of their swing speeds.

Without the necessary swing speed to impart extra backspin on the ball, you’ll end up hitting the ball lower and shorter than you should. Instead, what I suggest for better iron play is to hit the ball on as shallow an angle as you can while still aligning the iron’s sweet spot behind the ball at impact.

This is a powerful statement. If you are not deriving any extra benefit with the steeper strike, then why go for it? He says that the ball will come out lower and shorter. But why would that happen? We were led to believe that the steeper strike was going to produce a towering iron shot that would have a ton of spin on it??

A word you might have heard before in ball striking discussions is compression. We have always been told that in order to compress the ball more you have to strike down on it very steeply. While many tour players do this extremely well (Sergio Garcia comes to mind), it’s just not a viable pursuit for the rest of us.

Andrew Rice gives a very interesting discussion about compression in this article.

With the advent of radar devices like Trackman, we are accurately able to measure all kinds of information about what’s going on with the golf ball at impact that we never knew before. It’s challenged a lot of commonly-held beliefs in golf. While the teaching community is divided on benefits using Trackman during instruction, there’s no question that the data it has provided has helped dispel the notion that there is only one right way to swing a golf club.

One of the main points Andrew discusses in this article is that hitting down on the ball does not necessarily increase your compression.

Translation – the ball will not go farther, or spin more simply because you are steepening your angle of attack with your irons.

Watch this video, I believe this is a fantastic explanation of why hitting down on the ball more on its own does not produce a better golf shot.

This gets back to Joe Mayo’s argument that if you lack the swing speed of a professional golfer, a steeper angle of attack will simply produce lower shot trajectories that don’t travel as far. So in your quest to hit the ball farther by striking down on it, you actually might have done the exact opposite!

You might be a little confused at this point. Let me add a different explanation that I hope will provide some clarity.

I’m going to connect the dots a little bit here.

I stated earlier in this article that many golfers will take a concept like hitting down on the ball, and then make a mess of it when it comes to actually executing the shot.

This is the most difficult thing about golf instruction. You not only have to explain a swing thought to a pupil, but you have to make them understand it, and THEN translate it to their golf swing.

So while listening to an explanation of why you should hit down on the golf ball might make sense to you theoretically, you’ll have similar results to me, which is you’ll just hit the ball too heavy.

Simply put, you’ve gone overboard, and your swing is now too steep when your mind is actively thinking about “hitting down.”

The reason I was hitting shots heavy when I tried to hit down on the ball was because I was moving the low point of my golf swing behind the ball. This is probably one of the main reasons why so many golfers fail when they try to master this concept.

Adam Young wrote this article a few months ago that got a lot of attention, and for good reason.

He explains a very important concept of the golf swing, and gives a strong visual representation that helps make sense of why golfers fail to consistently hit great iron shots.

The golf swing is a circular motion, and every circle has a low point.

Better players all have the low point of their swing in front of the golf ball (which is indicated by the black line in the image below). This means they are making contact with the ball first, and then their club will interact with the turf at some point ahead of the ball. 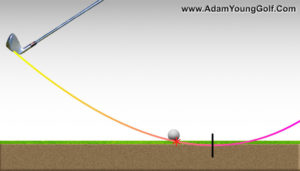 He used this video to show how a pro achieves this. You can see this player makes a tremendous, violent divot after striking the ball first. But we learned earlier that the divot isn’t necessary for the rest of us.

Here is where most golfers get it wrong, especially when they try to hit down on the ball. Their intentions and results are completely different.

When all you are thinking about is steepening your swing, it’s very likely that the low point of your swing arc will come behind the ball like the picture below. You’ll be making contact with the ground first instead of the golf ball. It’s the exact opposite of how the pros do it. 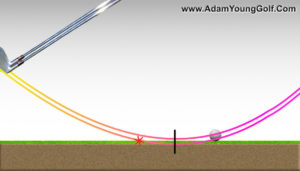 In my opinion, this is the reason why most golfers should not try to hit down on a golf ball. Your conscious mind will be telling your body something that it will not completely understand, and your results will likely not improve.

After all, isn’t that the goal of any swing change?

Putting it all together – You Don’t Necessarily Need a Divot

Alright, I’ve hit you with a lot of information. Let me try to summarize here.

In order to hit great iron shots you still need to technically hit down on the ball, but it’s just not as steep as we were led to believe.

I hope I’ve opened your eyes a little bit on this concept, and you understand the core issue a little bit better. The next time you are told to hit down on the ball more, it might be best to ignore that advice because your body might do something completely different than what your mind is telling it to do.

Why Rangefinders Aren’t for Everybody

How to Conquer the Awkward Wedge Shot

29 Tips for Every Golfer