This is NOT A DISTANCE IRON!!

. This iron is not built purely for speed. Despite having a hollow body construction, traditionally known for adding distance, consistency is touted as the focal point.

But wait, aren’t hollow-body irons (think PXG and TaylorMade P790) notorious for the occasional low spin, high speed “jumper” that airmails the green? Not this one. After testing the X Forged CB irons for the last 6 weeks with my own personal use and multiple client fittings, I haven’t seen a single “jumper-like” outlier.

Overall, I think Callaway is onto something with the consistency focus on their latest release. In this review, I’ll explore the design elements, testing results, and what kind of golfers I think the X Forged CB irons are appropriate for.

What Callaway Is Saying

To add some color to the results I saw in testing, I took some time to chat with Callaway’s Senior Director of Product Management, Dave Neville. I wanted to find out more about the engineering intent behind the X Forged CB. I learned a lot…

The Player’s Distance Iron is one of the fastest-growing and evolving categories of golf club innovation. As such, we’re now starting to see a small yet noticeable divide between the more distance-focused sets and those giving a curt nod towards consistency and tradition.

All of these irons strive to deliver the best of both worlds. They must be attractive yet forgiving, and sleek as well as stable. The X Forged CB is living on the more traditional side of this small divide, so it shall henceforth be referred to as a Players Performance Iron.

The Evolution of the Blade

Historically, more skilled ball-strikers (usually a single-digit handicap) have been looking for a slightly more forgiving version of a traditional blade. They’ve searched out clean looks, thin soles, and soft steel forgings. For decades these designs were void of major technological breakthroughs.

The one recent (and nowadays fairly common) technological advantage in Player’s Performance irons has been to use additional steel or tungsten in the club’s toe to center the sweet spot on the scoring lines. Any true blade player from the ’70s will tell you that the sweet spot on their old Wilson Tour Model or Powerbilt Scotch Blades was slight to the heel-side of the scoring lines. That’s because the weight of the hosel and tip of the shaft drew the center of the clubhead’s mass towards the heel.

, and for a good reason. To be clear, they are not alone in this endeavor. Plenty of iron releases like the Mizuno MP20 HMB are trying to address the needs of skilled ball strikers with modern technology.

Adding Forgiveness Can Expand the Market

Very few players above a six or so handicap would really benefit from playing these traditional Cavity Back irons. By adding some forgiveness to the X Forged CB, fitters can now put them in the hands of, let’s say, an 8-10 handicap golfer and still expect good results.

When I ask a better player what they are looking for in new clubs, the most frequently used word in their response is “consistency.” Without fail, everyone’s initial thoughts immediately go to a distance when you hear that word. But if you only think about distance, you are missing a big piece of the puzzle.

Callaway takes things a step deeper than just distance in the X Forged CB irons, focusing on something called spin consistency, which is a concept I explored in my recent Titleist TSi driver review. Anyone who spends time on a launch monitor (or upwards of 50 hours/week like me) knows how important spin is to distance and ball flight.

Dave Neville from Callaway told me that this is where the Tour Tuned Face Plate comes into play. Most other irons in this category suffer from the odd “jumper” that seems to sail over the green. The X Forged CB’s face is designed to minimize these kinds of shots, which are particularly frustrating for better players.

From my personal experience, I can tell you this has really held. The club isn’t magical – cuts still spin more, pulls still spin less. However, the spin rates, in general, are very stable.

I have not seen any of the fabled jumpers that hollow body irons have delivered in other clubs. The X forged CB has been a very consistent iron each time I’ve hit it or fit customers with it.

A couple of weeks ago, a Division 1 golfer I work with who will turn Pro next year decided to go to X Forged CB in his 3 and 4 iron. Why? Because he wants to be sure those clubs cover their distances even when they hit a tad off-center.

Who Should Consider the Callaway X Forged CB Irons?

As a fitter, I always recommend getting fitted and trying at least a few models of clubs within the category you’re looking to purchase (compared to the performance of your current set).

Here are some specific benefits I saw from the Callaway X Forged CB vs. other irons in this category:

I really like this approach from Callaway because X Forged CB isn’t trying to be a blade. A lot of other products that target this golfer are just putting out a slightly more forgiving “blade lookalike.” They still have a minimal offset, a razor-thin topline, and no tech to speak of.

Callaway is taking on the market from a different perspective. They purposely added offset (at the request of some tour players, by the way) and made the blade length a little longer. Also, they created a different look, because guess what, it’s for a different player!

What I particularly like about this approach is that Callaway was selective. They kept a thin sole but still paid very close attention to turf interaction and sound. They didn’t ignore the “feel” that these players will likely refuse to live without. All in all, I think it’s a beautiful mix of technology and tradition. And if that’s the kind of thing you’re looking for, be sure to put the X Forged CB

on your list of irons to sample at your next fitting. Cheers, and happy birdie hunting! 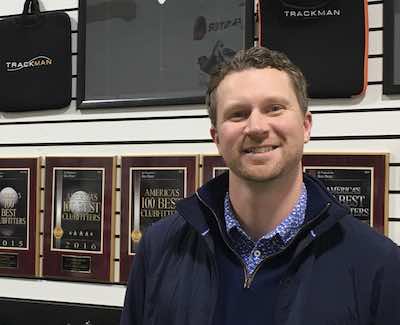 Driver VS. 3-Wood Off the Tee: What’s the Right Decision?

Why is Smash Factor so Important?

How to Practice Swing Tempo Effectively